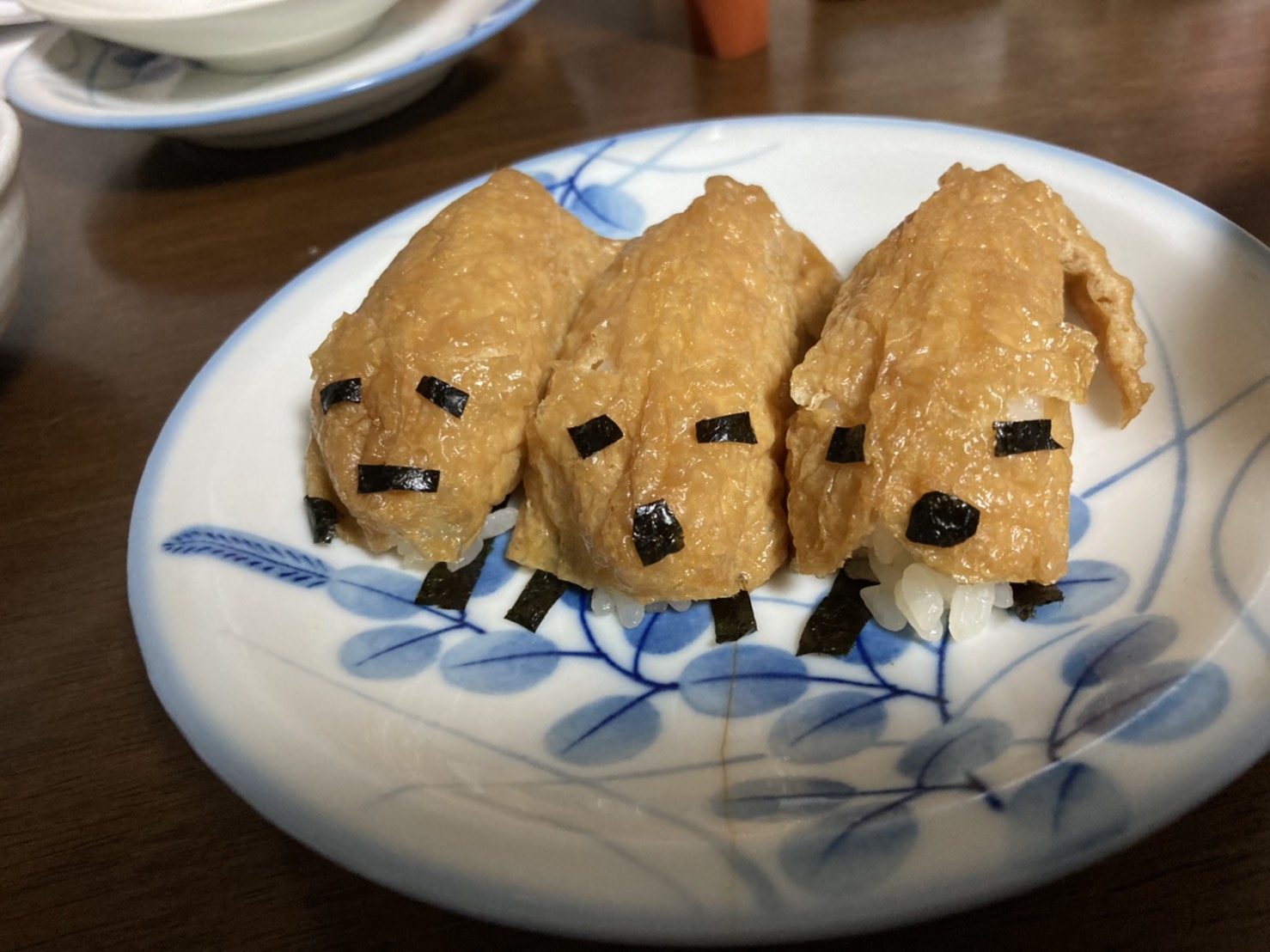 On the way to my hometown, I sat down on a bench at the platform. While I was waiting for the train, I saw a cicada. It was a black cicada with clear wings. There was no wind and the cicada wouldn’t fly, just crawling slowly on the ground. People who got off or got on trains noticed the small insect and avoided it.
The train came. I left the platform.
I don’t know how would the cicada be going. It would die as other cicadas do at the end of summer.

My father welcomed me with his handmade dishes. Three dogs lied on the plate, waiting for me to eat. They had brown skin of fried tofu. What is more, each of them had two ears and a tail. Noses and eyes were made of seaweed. It was special inari-zushi that my father made for me.
“Was it hard to make them, wasn’t it?”
“No. Just I wanted to make them.”
Replying, he looked down with a small smile on his face.
I ate all three dogs alone in order not to give the virus to my family.

Before going to bed, I checked my mother’s smartphone. She couldn’t have accessed her Facebook account just because she forgot the password.
It was no difficulty to modify the old password. I showed my mother how to do it.

Next morning, it was heavily raining outside the window. My father cooked me hotdogs for breakfast. While I was eating, he sat on the sofa behind the living room and talked to me from my back. I had to look back and ask him sometimes when I couldn’t hear his words.
“I went fishing,” said my father, who looked tanned. “Do you remember the place where we caught a lot of mackerels? I went there again.”
“Oh, I remember. We also caught a black conger, right?”
Several years ago, we went to Ōi Fishing Port by car, soon after I got the driver’s license. It was the first and the last time when a father and a daughter went fishing together. I was surprised that my father remembered such a tiny memory.
“Did you go to the sea alone? How many fish did you catch?” I asked.
When he replied “Alone,“ he seemed somehow lonely though there was no expression on his face. He told me that he caught two small mackerels. I imagined how he cooked them at home.
My father likes fishing so much that he named his two daughters after the sea, which I am proud of in my mind.

When the conversation was over, it had already stopped raining. I went out to visit the grave.
The temple was located within five-minute on foot from my parents’ home. First, I filled the bucket with tap water and took the bucket and a dipper to the grave. Even if I closed my eyes, I could find the way to the very place of my family’s grave among other graves.
After washing away the tombstone with water, I lit the two candle. Incense was burnt and the atmosphere smelled sweet. Then, I put the palms of my both hands together in front of my face.
These were the ceremony we did every summer. Grandparents, uncle, aunt and cousins, all of them used to get together and visit the grave to greet the ancestors.
In this year, I was alone.
What made me more sad was that there was no flower. My grandmother, who never forgot to put flowers to the vases attached to the tomb, might have forgotten in this time. I put fresh water into the empty vases.

I went back and visited my grandparents’ house, next to parents’ one. The door was unlocked, but no one was there.
“Grandma left for the temple,” my mother said to me. So I decided to wait on tatami.
My grandmother came back before long. She looked as cheerful as usual. I was relieved because my grandmother hadn’t forgot to arrange flowers.

I left there in that morning. It was very short stay.